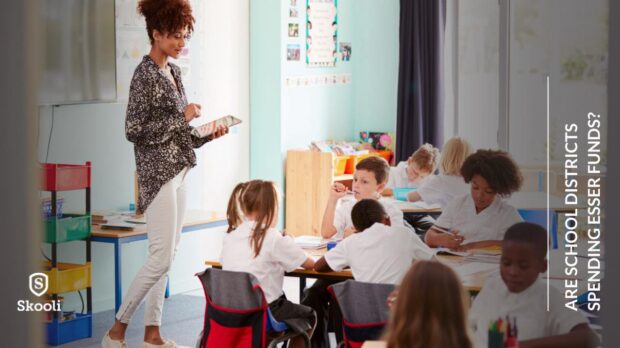 “From the moment the U.S. Department of Education began distributing $122 billion in relief funds in March 2021, officials emphasized the need to act swiftly to help students make up lost ground,” as asserted in a September article.

Some people have been disappointed, however, by the pace at which districts are putting ESSER funds to work to address Covid-19 learning loss. The unspent funds are raising concerns.

In August, members of the House asked the U.S. Department of Education secretary Miguel Cardona how those funds are being put to use across the nation. According to the article, Roberto Rodriguez, an assistant secretary responded that “It’s hard to argue with the importance of addressing lost instructional time for all students.”

With this recent extension of the spending deadline, there is more concern that interventions will not be put into place quickly enough to benefit students.

It is not that school district administrators are not committed to helping students. Several factors have come into play concerning spending, including:

However, on September 29, FutureEd reported that “School districts and charter school organizations that have committed but not yet spent their first round of federal Covid-relief aid by January 2023 can seek extensions providing up to 14 more months to draw down the funds, under new guidance released by the U.S. Department of Education today.”

Still, legislators, administrators, educators, parents and students are left to wonder when the plans will be implemented.

Early on in the pandemic, a large number of districts used relief funds to help make technology and internet access more equitable. It was a necessary move considering that many students living in rural or higher poverty areas did not have access to broadband internet that could handle online education. And some students who lived urban areas with easy access to the internet did not have the necessary devices to take advantage of it. Even now, some students are without equitable access to technology and many are concerned that once the relief funds are gone, the ground gained will not be maintained when it comes to digital equity.

A September 2022 report from the Department of Educations’ Office of Educational Technology noted the departments commitment to helping schools address equity gaps. Even with all of the challenges, the pandemic has shown us the increasingly important role of technology in making education and the interventions to support education equitably accessible.

To do that administrators and educators must work together to make sure Covid relief funds are spent in a timely manner and in such a way that students benefit now and in the future.

In looking to the future, districts must think both about the approved spending plans and about how to continue any improvements once funds are depleted.

Some people have expressed concern that any changes will not last. Sue Deigaard, a Houston school board member, noted “We’re going to get to the end of the next two years and nothing is going to look different for the school system.”

With those concerns in mind, districts can move to implement changes that are sustainable and proven. For example, tutoring is a research-proven intervention that can support all students, not only those who are struggling but also those who are doing well but seek additional assistance to prepare for exams or fine tune essays.