Choosing a college: Why a big name school might not be the best option 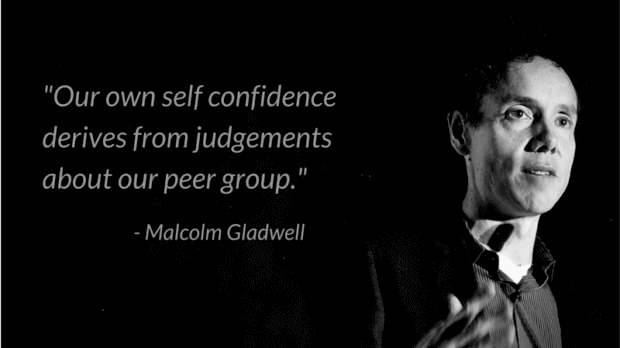 For many North American high school students and their parents, there’s a focus on an end goal of earning acceptance to a high ranking college or university; you get the grades, you go to a good college. This mindset is in line with the common conception that the bigger, more prestigious the college, the more desirable it is for high school graduates to attend.

As of late, though, we’ve seen an increasing number of studies emerge claiming that this might not be the case, that students from lower ranking colleges and universities are just as likely to find success as those from prestigious post-secondary institutions. Malcolm Gladwell expands on this as he provides reason as to why this might be true.

“Our own self confidence is derived from judgements about our peer group.”
– Malcolm Gladwell

Malcolm Gladwell, author of New York Times Best Seller David and Goliath, claims that “little ponds give their fish more freedom”, that smaller, less prestigious colleges provide opportunity for students to feel better about themselves due to the fact that there is less elite level competition to be compared to. A student with an IQ of 140 studying in a big pond of very intelligent fish with IQs of 145 and 150 will be inclined to feel inadequate by comparison, when in reality the student is very smart. The big pond college option not only risks damaging self confidence, but also poses a very serious risk in terms of dropping out at the post-secondary level. Gladwell notes “huge” amounts of dropouts in the areas of math and science and asserts that students at the bottom of classes are dropping out in massive numbers not because of any lack of intelligence, but because of the intelligence of the people around them. Incredibly intelligent students are dropping out of top level colleges and universities in North America because they feel stupid; they compare themselves to their classmates and lose all inclination to continue their education.

A smaller pond of fish with IQs of 120 and 125 on the other hand might be the ideal environment for a student with an IQ of 140. He or she would feel capable, confident, and as a result, in a position far less prone to the risk of dropping out.

Whether or not you agree with Gladwell, his theory is food for thought and serves as a reminder that no matter how successful a student is in high school, careful consideration should be taken when selecting a post-secondary institution. For some, a smaller, less competitive pond might be the best option for academic success and satisfaction in the future.